Esha Sadr-Eshkevari is an Iranian artist and writer. Born in Nooshahr in 1983, Esha spent her childhood in port cities of Iran, attending exceptional talents school 1994-2001. She attended Art and Architecture University and graduated with MA degree, she divides her time between Prague, Vienna and Tehran during her PhD. in Theater, Film and Media.
Esha has been working in many Intercultural and interdisciplinary art projects. She works in a variety of media including documentary film, theatre, performance art, video art and writing.
Esha has exhibited performances throughout Iran, USA, France, Germany, Morocco, since 2012. She has also begun a video art & text series which she named “Little Confessions of Life” more than 100 less than 1miniute mute videos since 2011. In addition, she has been published numerous art critics in new media and theater in medias within. 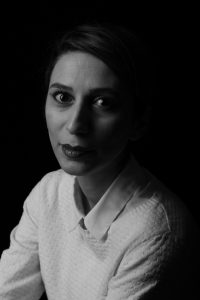